You are here: Home / Sword Swallowing

~*~
“…I’ll make thee eat iron like an ostrich,
and swallow my sword like a great pin, ere thou and I part.”
-Cade, from William Shakespeare’s King Henry VI, Part II
~*~

Dai Andrews holds four world records for sword swallowing, including swallowing a saber blade that is curved 120 degrees from point to hilt.

In addition, his show may feature the swallowing of two 24″ blades, one of which is curved from side to side in a serpentine,  (known as a Kris type blade). He also swallows a 12″ dagger, a set of up to 15 swords that he swallows all at once, a 2′ long pair of forceps, glowing neon tubes, needles, and other strange and unusual objects.

Dai Andrews exclusively performs the swallowing of a Red Hot Sword that he heats with a blowtorch live onstage!

Sword swallowing has always been a misunderstood art form, and has constantly suffered from the misconceptions that it is a magicians trick. Even those who understand that it is real often have vast a misunderstanding of the techniques employed. For example, even the virtually omniscient Encyclopedia Britannica’s definition is full of half truths, and misinformation.

A magician’s trick (False) dating back to ancient Greece and Rome, involving the swallowing of a sword without bodily injury. Capuleius, in his Metamorphoseon, tells of seeing the trick in Athens, performed by a juggler on horseback. In reality, sword swallowing is not an illusion or trick. Those who practice it must first overcome their reflex gagging at objects touching the back part of their mouths. Long practice controls this reflex. The pharynx must also be conditioned. Objects introduced here cause much pain, and only after several trials can they be passed without great discomfort. The stomach is conditioned in a similar manner. Sword swallowers employ slightly varying methods.(Mostly True) While one may swallow a sword without using any intermediate apparatus, such as a gutta-percha tip, another will take this precaution. The majority of sword swallowers employ a guiding tube which they have previously ingested, and hence their performances are less dangerous. The tube is 45-50 centimeters (17.7-19.7 inches) long and is made of very thin metal. With a width of 25 millimeters (a little less than an inch), the tube permits easy entry of flat-bladed swords. (Completely False) Exhibits of sword swallowing, beyond their entertainment value, have helped to further medicine by demonstrating to physicians that the pharynx could be habituated to contact, thus making experimentation and exploration of the involved organs possible.” (True, sword swallowers are occasionally employed in medical research for there unique abilities. Dai andrews assisted doctors at Johns Hopkins University in 2007)

Webster’s Third New International Dictionary of the English Language, Unabridged; defines a Sword Swallower as “a performer who pretends to swallow a sword or some other rigid object.” Nothing could be further from the truth. In fact sword swallowing is quite real, it is a deadly art with a long and colorful history.

Sword swallowing seems to have originated about four thousand years ago in India. There, the art was developed by magician/priests, known as fakirs or sadhus and was used as a demonstration of invulnerability, proof of the priests connection with the gods. In fact most forms of entertainment including; magic, drama, and music were religious practices strongly tied to shamanistic traditions. As an interesting and related side note, Native American Shaman seem to have independently developed the art of sword swallowing. The shaman would swallow either a long stick or an arrow to prove his strength and endurance. It was practiced along side the handling of venomous snakes, hot coals and other “ascetic” religious practices.

From India, sword swallowing spread to Greece, China, and the rest of the world. Throughout the ancient Roman Empire sword swallowing could be seen at festivals like the Ludi Florales, (the games in celebration of Floralia, the festival to the flower-goddess Flora celebrated at the end of April and beginning of May).

One of the earliest descriptions of the feat in the west come from Lucius Apuleius (c.123 AD-170), who was a poet, philosopher, and rhetorician who lived within the Mediterranean region of the Roman empire. Here is a description of a sword swallower from his book;

… I saw with these eyes a Juggler that swallowed a two hand sword, with a very keene edge, and by and by for a little money that we that looked on gave him, hee devoured a chasing speare with the point downeward. And after that hee had conveyed the whole speare within the closure of his body, and brought it out againe behind, there appeared on the top therof (which caused us all to marvell) a faire boy pleasant and nimble, winding and turning himself in such sort, that you would suppose he had neither bone nor gristle, and verily thinke that he were the naturall Serpent, creeping and sliding on the knotted staffe, which the god of Medicine is feigned to beare. But turning me to him that began his tale…”

Another author, Ludovicus Vives, a contemporary of Apuleius, observed “…to the great fear and horrow of spectators (he would) swallow swords and vomit forth a power of needles, girdles, and coins.”

The practice of sword swallowing also traveled north into China in the 8th century, as evidenced by this illustration from Xin Xi Gu Yue Tu, written in the T’ang Dynasty (AD 750). 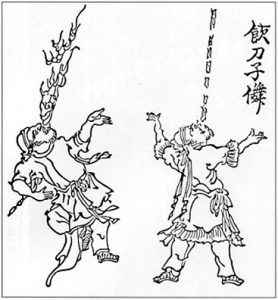 Sword swallowing was popular in Japan in the 8th century and was often seen as part of an acrobatic form of theater known as Sangaku, which also featured juggling, tightrope walking and other related skills. Sangaku like Gigaku, and other forms of drama popular in Japan popular prior to the 11th century, traces it origins to southern China, and then back to India, and possibly Greece. However, in Japan unlike India, the art was associated with theater as opposed to religion.

From Greece and Rome, sword swallowing spread across Europe at the hands of medieval Jongleurs; street performers who would travel the countryside performing in barns and public squares. In the middle ages, sword swallowers, like magicians, jugglers and other entertainers were often condemned and persecuted by the church. Seen as witches and devil worshipers, they were often imprisoned, tortured or killed. Still, in most places they were welcomed by the common folk, and the tradition of the wandering entertainer remained strong, despite the danger posed by the church. Fortunately, by the mid 17th century, performers could once again wander more or less freely, and they became common sights on street corners and at festivals across Europe.

Saint’s day festivals were extremely popular throughout Europe in the 17th, 18th and the first half of the 19th century. These festivals were part carnival, market, circus and theater all in one. There, one could find almost any form of novelty or a amusement know to man. Either set up in tents, or on open air stages, it was quite common to see magicians, jugglers, fire eaters and of course sword swallowers demonstrating their skills. By the mid 1800’s however the fairs began closing down as patrons deserted them in favor of proper theaters.

The art first became popular in America about 1893 when it was one of the hit features of the Chicago World’s Fair that same year. Four years later the act was so popular that it earned the following entry in the book:

The Individual comes out dressed in a brilliant costume. At one side of him are flags of different nationalities surrounding a panoply of sabers, swords and yatagans, and at the other a stack of guns provided with bayonets. Taking a flat saber whose blade and hilt have been cut of the same sheet of metal, the blade being from fifty-five to sixty centimeters in length, he introduces its extremity into his throat, taps the hilt gently, and the blade at length entirely disappears. He then repeats the experiment at a single gulp. Subsequently after swallowing and disgorging two of these same swords, he causes one to penetrate up to it’s guard, a second not quite so far, a third a little less still and a fourth up to about half its length…
Pressing now on the hilts, he swallows the four blades at a gulp and then he takes them out leisurely, one by one. The effect is quite surprising. After swallowing several different swords and sabers, he takes and old musket armed with a triangular bayonet, and swallows the latter, the gun remaining vertical over his head. Finally he borrows a large saber from a dragoon who is present for the purpose and causes two-thirds of it to disappear. As a trick, on being encored, the sword swallower borrows a cane from a person in the audience and swallows it almost entirely.“

In the 1900’s sword swallowing found a new home in the American side show, and for many years sword swallowers were numerous. They would travel with circuses, side shows and carnivals across America and around the world. There, the art prospered like never before. For a time circus was the most popular form of entertainment in America, and sword swallowing was a part of it. As its bond with the side show grew, the art’s history and connections to theater and religion were forgotten in the western world, and sword swallowing became the sole property of the side show. For a wonderful description of what life in the side show was like for a sword swallower, and what it is like to learn to swallow swords, read Memoirs of a Sword Swallower, by Daniel P. Mannix.

Unfortunately the golden age of the circus is long past. In the 1950’s, with the increasing popularity and cost efficiency of mechanical rides at carnivals, one by one the side shows began to disappear. The sword swallowers had lost their home, and there numbers began to dwindle. Today there remain fewer than one hundred sword swallowers in the entire world. 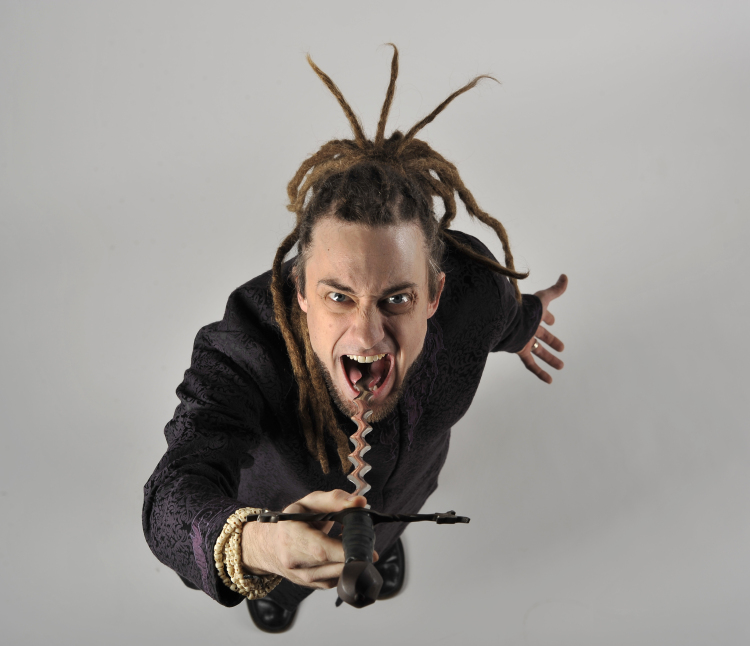