Dai Andrews has traveled the world seeking hidden knowledge and forgotten arts, studying with Yogis and Martial Artists, Magicians and Fakirs to learn and perfect their arts in order to bring his audience a performance of strange feats and unusual abilities unlike any previously witnessed.

Dai is a four time world record holding sword swallower– including one for swallowing a sword that is curved 120 degrees!

His performance also features a wide range of mind-over-body demonstrations, escape artistry and a host of other skills infused with comedy accompanied by an original musical score. 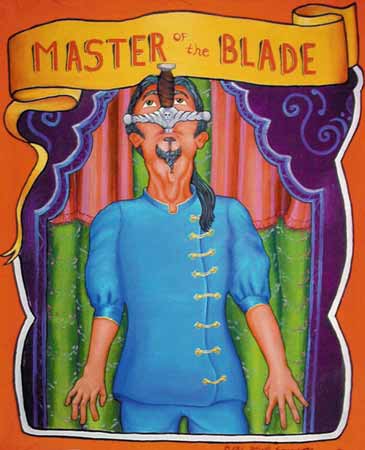 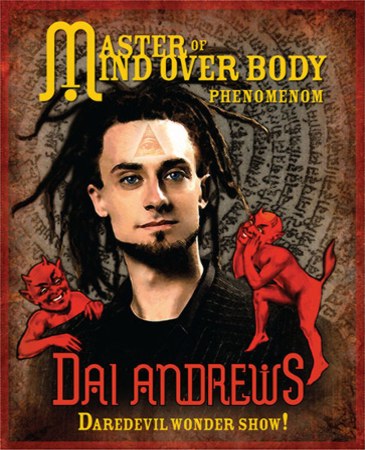 Fakir: One who practices extreme self-discipline in order to perform feats of magic & endurance.

“Modern Fakir” is Dai Andrews’ signature performance: an exciting, humorous and participatory journey through the colorful history of mind-over-body phenomenon presented by a living master of these ancient traditions. It examines the venerable sages who created these strange arts, the cultures from which they emerged, and explores what we can learn from them today.

This extreme performance presents new, strange and marvelous demonstrations you will never find anywhere else alongside re-imagined favorites, presented with humor and wit. Dai Andrews enthralls audiences with the mind bending exhibition of feats from Hindu Fakirs, Shaolin monks and beyond. Modern Fakir provides a unique glimpse into the potential of the human body.

Dai Andrews performances can be customized with different acts and performance lengths, from just a few minutes to a two hour full evening feature, according to the needs of the client or venue.

His performances never contain any blue humor and are appropriate for all ages.

Dai always treats his audience and volunteers with respect.

Astounding! You’d be hard pressed to see this kind of amazing entertainment from anyone else.

The #1 practitioner of the most dangerous thing ever offered at a circus.

Humorous and riveting. Dai’s show will leave you with your heart in your throat, which sure beats having a sword there. I loved what I saw when my hands weren’t covering my eyes.”

END_OF_DOCUMENT_TOKEN_TO_BE_REPLACED

Dai Andrews has studied with Yogis and Martial Artists, Magicians and Fakirs to learn and perfect their arts in order to bring his audience a performance of strange feats and unusual abilities unlike any previously witnessed.

A Fischer-Price magic set received on his fifth birthday would introduce Dai to a lifetime of mystery. Sleight-of-hand was only the beginning, as a teenager Andrews began practicing escape artistry and was driven by the desire to go beyond tricks & illusions. He would soon be performing acts of fire eating, sword swallowing and more. Dai began traveling the earth learning ancient and lost arts. He developed a thirst for secret knowledge driven by a passion to discover the limits of what the human body could achieve.

Dedication to the martial arts and more than twenty years of Kung Fu training has also helped motivate Andrews to push beyond his own limits. In July 2010, he was awarded the rank of Second Tuan (degree) by The World Kuoshu (Kung Fu) Federation.

Dai’s professional career began in 1994 at the age of seventeen in his hometown of Baltimore, Maryland. Just one year later he would find himself in Europe perfecting his craft under the most trying conditions. Met with great success, Dai appeared on television, was photographed for Time magazine, performed with the circus, and was invited to take part in Italy’s prestigious “Commedia del Atre”.

Since that time, Dai has performed all over the world, from Baltimore to Barcelona, Johannesburg to Tokyo giving demonstrations in more than thirty countries on five continents. He regularly appears on TV, and as a headline entertainer at festivals, colleges, cruise ships & Las Vegas casinos.